The shaman down the hall

In the spirit of the holiday season, I thought I would describe my experience of going to a shaman the other day. As I was lying there on the ritual rug having a gourd rattle shaken over me, I thought, hey, some people on my LiveJournal friends list may not have been to a shaman. I should describe this.

I used to go to an acupuncturist whose office was in a converted house in Northwest Portland. When my quest for a) enlightenment, b) healing of the Nameless Darkness In My Soul™, and c) relief from this weird and unaccountable swelling of one ankle went beyond what Mr. Needles could do even with The Seven Dragons, acupuncture's nuclear option, he referred me to "the shaman down the hall."

Intrigued--not to mention desperate--I made an appointment. The shaman down the hall, it turns out, was Sandy, a Reedie from the Sixties with a Philadelphia accent, a Ph.D. in clinical psychology and a specialty in trauma therapy. But he's also a trained shaman.

Shamans journey. They travel to Lower World and Upper World, accompanied by totem birds and animals, demanding a cure for what ails you, sometimes wresting the answers forcefully from whatever's hanging onto them. Then they either remove the problem from your body--extraction--or find and restore missing bits--soul retrieval.

Over the course of three years' work, Sandy encouraged me to learn the shamanic journey myself. I took several courses, and he helped me refine what I'd learned, but journeying wasn't a part of my therapy. We accomplished miracles with slightly more mainstream methods, and concluded our efforts three years ago.

The NDIMS™ made a big comeback recently. Or maybe it's more accurate to say that after three years of living in daylight (standing on my feet, being a girl) I was ready to deal with the next level.

Whatever. I called the shaman down the hall and asked if he could find my soul. 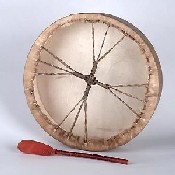 Sandy's office is unchanged: two chairs, a small chest with a lamp on it, a window looking east. But this time there's a large rawhide drum against the wall. A tray filled with votive candles in glass holders of all colors sits on the chest, and in front of this fire are a Zuni stone bear fetish and a little crystal Buddha. 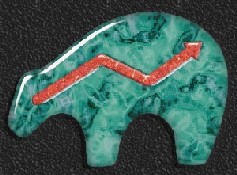 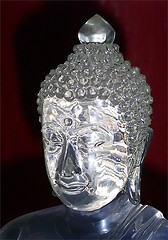 Sandy asks me for permission to journey on my behalf. I give it. I lie on the Navajo-style rug, my head near the window, my feet toward the door, looking up at the candlelight flickering on the ceiling.

He begins with rattling. Noisy, raucous rattling produced by a gravel-filled gourd on a stick. 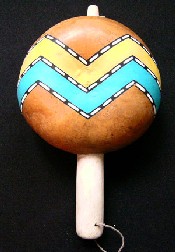 It clears the room. He shakes the rattle over my body. I close my eyes. It's all a little strange. Uncomfortable. I think I'll just drop into "not really here" mode.

Next he picks up the drum. A steady four beats to the second is prescribed by shamanic tradition pretty much worldwide. Our tribal forebears may not have called it the threshhold between theta and delta brainwave frequencies, but they knew how to induce trance.

After a minute or two of drumming--I'm no longer tracking time here--he makes a modern-day adaptation: he puts on headphones and launches a recording of shamanic drumming. Then he ties a silk scarf over his eyes and lies down beside me on the rug.

I don't know how much time passes in what is, for me, just silence. The last of the daylight fades, the candelight on the ceiling gets brighter, and I'm in and out of a trance state myself.

This is as good a point as any to mention that most traditional shamanism is conducted under the influence of entheogenic substances as well as drumming. I've never tried swinging from the vine myself, but Sandy has. Another of the modern-day adaptations is that he's not using any substances now. There's not even so much as incense in the room.

There's huge pressure in my head and behind my eyes, and I feel what I've always identified as "sadness," though I realize now that it's just general pain from the NDIMS™. Tears spill out the corners of my eyes and down into my hair, and I'm glad Sandy's blindfolded because I've always been ashamed of crying.

The feeling becomes so intense that I'm afraid wracking sobs are going to interrupt the proceedings. Suddenly I find myself face to face with a beautiful pair of intense, dark eyes. It's Krishna, and he wants me to look only into his eyes and ignore everything else, as if to steady and distract me from a painful operation proceeding on my body.

Krishna makes a Drusilla-like gesture, two fingers from his eyes to mine and back again, hypnotic and calming. Then, just like Drusilla, he slashes my throat with his fingernails. The shamanic journey, at least in my experience, sticks its ladle into the soup tureen* of the journeyer's mind, and brings up the strangest combinations of ingredients.

As my blood pours out of my neck, Krishna begins transfusing me with ocean water through connections he affixes to my fingertips.

Sandy moves and begins making strange, ferocious growling noises. My eyes open. He gets up. I don't know what his totem animals are--it is never discussed or disclosed--but they must have big teeth.

He's still blindfolded and headphoned, and he's kneeling next to me, swaying. He reaches toward my sternum and seems to struggle to pull something out of me. He pulls and pulls, breathing heavily and growling. Whatever he's pulling on gets longer. I feel a faint *snap* as it comes out, at arm's length. He flings whatever it is out the window with a sound of disgust.

He removes another inclusion from my chest cavity. Two from behind my ears. One very big something from my stomach. A whole bunch from my pelvis and thighs. Each removal is accompanied by the casting-away gesture, and what sounds like contempt and distaste. At one point, I risk another glance at him, and in the dim light he seems to morph for a second into a former lover. I close my eyes again.

He lies back down. I find myself in Machu Picchu, at the Temple of the Condor, lying on the altar stone. 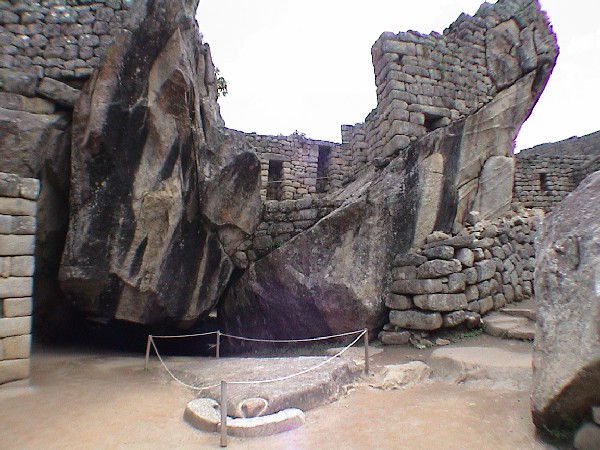 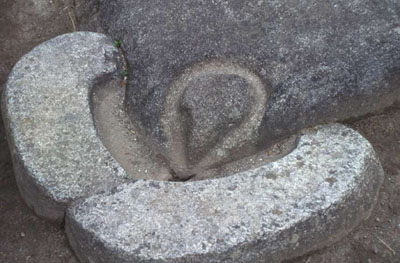 Someone there--it's no longer Krishna--cuts my throat once more, and my blood flows out and down the stone channels into the earth. This time there's no transfusion. I watch my body die, become a mass of worms, then decompose completely. A huge lotus blossom comes up out of my uterus. It's pink-tinged, fragrant, limned in late-day light. The bud, the flower, and the seed pod are all visible.

Sandy moves again. I sense that a good deal of time has passed. I become restless and ready for the journey to end, but we're not there yet. He makes a tube with his hand and puts it in the middle of my chest, then leans down and blows through the tube with all his strength.

He does the same to the top of my head, then again at my chest. I don't like being touched. We agreed beforehand that the work would involve some physical contact, and I expected it, but it's easier if I just go away again.

So I do. Spiritual guide-figures I've known before stand around the Condor Stone, looking down at what's left of my body. Then they turn and look at me ('cause I'm standing right here).

Sandy slowly sits up and rattles the gourd over my body, then asks me to come back into the room. I open my eyes. He excuses himself to wash his hands, looking a bit spiral-eyed and very tired. I must have risen at that point myself, because I know I ended the session sitting in the chair.

The debriefing is short. Sandy says that rather than a soul retrieval, he did an organ retrieval, something I've never heard of. He was sent in search of my heart. "It was so well-hidden," he says, "that I had to turn myself into a mist to even get into the place where it was."

He explains that he removed inclusions from all over my body, and cut some cords. I don't know precisely what this means. "Some of the inclusions were from sexual situations." I have no desire to ask for more detail.

I pay him, say goodbye, promise to follow up and let him know the outcome of the work. I go down the hall and out of the converted house, probably for the last time. The night is chilly and clear. I walk halfway around the block and back, breathing and coming down to earth enough to get behind the wheel of my car.

Later in the evening I notice that I'm feeling neutral. Not up. Not, thank God, down. And not flatlined. Just...easy. I think I may have felt this way sometime before, but I can't remember when. Memories that always make me angry or tearful--never far to seek--rise up and seem to hit a rubber bumper. Instead of clanging around loudly, shamefully, painfully in the echo-chamber of my body, making me feel that my whole head will explode with tears, they're like voices in a cozy, firelit room, from big armchairs. Maybe with glasses of cognac. Conversational voices. Reminiscences that have lost their sting.

In the two days since, I've continued to be easy in myself. The friendly me, the one with a laugh and a greeting for even strangers in the elevator, seems to have taken up residence again.

Apparently the Nameless Darkness In My Soul™ can be displaced without having to be named. Do I need to know where I hid my heart, or why, or with (from) whom? Or when or under what circumstances? Would a guess be as good as a recovered repressed memory?

My name is Anne. Out my new office window, I can see a flock of geese heading south. For a moment, they form a perfect "A" against the white sky.

kispexi2 came up with that term.