...that LJ and Dreamwidth would be a very nice place to come back to in this difficult time. How's everybody coping?

So far, my family and I are well, but I've got a nephew working in a big grocery store--I guess they're "first responders" now--so that's a little worrying. Mostly, we're trying to support my mom, who just turned 90, by getting her what she needs without actually getting closer than six feet. Loneliness is the scourge of the elderly at the best of times, and these are not the best of times.

I'm lucky. I've got an income that continues to come in, at least until the stock market eats it up. I'm able to support one sister, whose income has suddenly ceased. The weather, normally dismally rainy this time of year, has been perfect, so we can get outside. The death of car traffic is a blessing. People are out walking and rolling in the streets, greeting each other from a safe distance.

Every day seems to go from dark cloud to silver lining and back again repeatedly. It's impossible not to think about the permanent damage to society, and a challenge to consider what good might arise from the ashes.

So I wash my hands a lot, thank the universe for the internet-may-it-keep-running, and offer a blessing to you all.

I timed my Season One and Season Two re-watch to end yesterday, so I could launch right into Season Three (which just dropped on Netflix). I'm trying to figure out what I find so compelling about this show. The theme music was running in my head all day today, saying, "Go home! Turn on Netflix! Watch Season Three!" like some kind of addiction.

I'm kind of fannish on Philip and Trevor, and wouldn't hate it if some more fic were to appear....

My two sisters and I weathered a crisis over the summer in which our mother, 88, underwent three surgeries. The third one was an emergency, during which she was taken from her condo on a stretcher, to the emergency room, to surgery, to rehab, and thence to her new assisted living apartment.

She never saw her own home again.

We prepared and sold the condo in short order. We were going to need that money pretty fast to pay the assisted living rent. Mom agreed to it all willingly.

My mom and my younger sister, touring "the home"

It was such a nice place! 24-hour on-call help, three pleasant meals a day served in a communal dining room, but all the privacy of a normal life in the apartment itself. Rides to doctor appointments. Medication monitoring. Laundry, housecleaning, and bed-linen changing provided.

I've been working with sigil magic lately. I don't know if it works, but it's turning into a form of creative expression that I didn't expect.

The concept is that written words have power (they don't call 'em "spells" for nothing). You distill a statement of intention down to a simple clear phrase, then remove the vowels, then remove any duplicate consonants, so "My intention is to find a five dollar bill" becomes:

I FIND A FIVE DOLLAR BILL

which becomes:
FNDVLRB
Then you take the remaining consonants and create a glyph from them, something that abstracts them enough that they aren't really "readable" anymore, like so.

Once you have your sigil, you launch or activate it through meditation, focused intention, ritual, etc. Then you're supposed to basically forget it. Let it go out into the world. It should be difficult to remember which sigil means what after a short time has passed. The idea is to let it melt into your unconscious mind, which will then act on it. Some magicians burn theirs.

After a couple of dozen sigils, I began to develop a personal style. I got some paint pens and a stack of blank black business cards and a circular punch. My activation ritual morphed into the act of coloring, then photographing, cropping, and stylizing each sigil image with a drop shadow, then storing the image in a special file. I stick the paper original on my wall with Blu-Tac.

Pretty soon I had a collection.

So I decided to make magical house art out of them. In a further act of activation-consecration-launch, I'm now gluing them between glass bezels and hanging them on my front door jamb.

This house of mine gets witchier by the day.
Crossposted from Dreamwidth, where there are

I'm still watching Supernatural. Season 14. The little show that could.

Show has had its ups and downs, and the fandom--which seems to have expanded rather than contracted over the years--is almost as nutty as ever. But I still like the boys.

I long since stopped being a focused enough fan to get involved in ship wars or fanwank.

I have no expectations of any canon Destiel. I'm perfectly happy with the expansion of the universe to include Apocalypse World hunters (including doubles of our old friends), the return of Mary, the British Men of Letters (though their ultimate banishment from our shores was satisfying), and Jack. I loved the return of Chuck. The musical episode brought a tear to my eye. I thought the episode from the POV of the Impala was brilliant...

...and I really liked Byzantium last night. So no death is ever permanent on Supernatural and we knew Jack wasn't gonna stay dead, and of course someone made some crappy deal with a supernatural creature to bring Jack back. Okay by me: Family and bad deals. As they say, that's it. That's the show.

The reunion of Jack with Kelly Kline was lovely and the mourning/drinking/nougat scene was just solid gold. This is no country for old men, and the boys are getting there, and the end is surely in sight. I'm just enjoying it until that ending comes.

...why I painted my porch bright purple (the paint color was actually called Red Meets Blue) until I got a security camera--and a bright, sunny (albeit VERY CHILLY) day. Now I can enjoy my color choice from indoors, on my phone.

The technology of home security is weird. I don't want or expect to catch any villains with this thing. Mostly, I want to see who's at my door, or whether my cat Graydie is sitting there wanting to come in.

But since it's brand new, I'm having fun turning on the speaker at night, saying, "Hey Boo-boo," and getting Graydie to look up at the camera.

I read yesterday that Flickr is about to change its retention policies, so I went there for the first time in quite a while to plan a kind of general rescue of my old photos.

The very earliest one was dated 2005, and corresponds to one of the first posts I ever made on LJ. Let's see if I can remember how to attach a photo to a DW post, because it's been a while since I had to actually write HTML to do that. 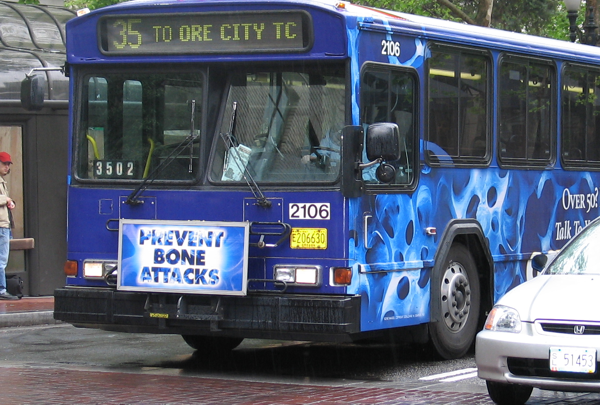 Okay. Here it is. I went out on my lunch hour one day in 2005 with an early digital camera (maximum image size 600 px wide), and thought this bus ad was funny enough to make a LiveJournal post. I was just getting the hang of even how to think about blogging, a word which etymonline.com tells me did exist by 2005.

So here we are, thirteen years later. I was an Old then and have gotten no less Old, of course, relative to internet people or in absolute terms. I'm 63 today.

Since 2005 I have retired from the job I took a lunch break from that day. The building I worked in for much of my career--behind and to the right of me as I took that photo--is under massive earthquake-proofing these days, basically an empty shell of bullshit postmodern architecture plus a famous statue, while all its 3000 denizens work in rented spaces around the downtown area. I don't get downtown anymore, so I haven't seen it.

I've also written and published a novel and become a professional editor. I've built myself a little recording studio and become part of a podcast, the Story Grid Editor Roundtable, a group show of which my first solo episode just posted today.


So hello to all who've been more loyal to the DW/LJ platform than I have, and to those returning because of the impending Tumblr diaspora. And happy birthday to me. Crossposted from Dreamwidth, where there are

I am pleased to announce the official publication of Restraint.

The journey from fanfic to published novel has been a long one. It involved a steep learning curve, certification as an editor, and eleven full drafts over three years.

The resulting novel is 43% smaller than its fanfic original. Its average chapter length dropped from 3600 to 2100 words. I toned down the period language a bit. Tightened up the plot. Cut a few characters and a couple of subplots.

And yeah, deleted a lot of scenes, some of them beloved. Those were hard decisions. But I think it's a better story now.

Its heart remains the same. It's still the romantic, bittersweet story of lifelong forbidden love between a portrait artist and a nobleman who face down gossip, blackmail, and censure to be together any way they can.

You can get it now in print and Kindle from Amazon, Amazon UK, Amazon Canada, and Amazon Australia.

And Iif you do, 'd be so pleased and honored if you wanted to write me a little Amazon or Goodreads review, and tell your friends.

Who here likes audiobooks? Can I ask you some questions?

What's important to you in a reader/narrator/actor--particularly in fiction? Have you ever figuratively thrown an audiobook across the room because some particular thing about the reading bugged the crap out of you?

For example, do you value voice quality above all? Can't stand certain types of voices? Would listen to Alan Rickman reading the phone book?

Or is vivid characterization most important? Do you like really dramatic character readings? Or are subtle variations enough for you to keep track of the story?

How much do you care about authentic dialect, accents, and accurate representation of, say, foreign words in a text?

What about male versus female voices? Have you ever felt that an audiobook would have been improved by an actor of a different vocal gender?

And pacing: do you use the playback speed control on your audiobook app if someone is too slow? Too rushed?

Here's why I'm asking: I'm thinking seriously of hiring a voice actor to create an audiobook of Restraint. I know what I like, but in the long process of workshopping the novel I've learned that my taste is pretty specific, maybe even alienating to people who might like my work if I opened it out a bit more.

I can't please everyone, of course, but if I'm gonna shell out for this production, I'd like to get a sense of your taste, too, and try to meet it.

What's the best and worst criticism you've ever received? And how did you assimilate it?

I'm thinking mostly of feedback on writing, but I'm interested in experiences of any kind of critique you may have received on any kind of activity.

Here's why: In September I'll become a certified Story Grid Editor. There's a big discussion among Story Grid course-mates about how to make sure the client is ready for the editorial work.

Well, receiving feedback is a skill, and I want to write a little book or cheat-sheet for prospective clients to help them build that skill. I've managed to acquire it, but I don't know how I did it.
Crossposted from Dreamwidth, where there are